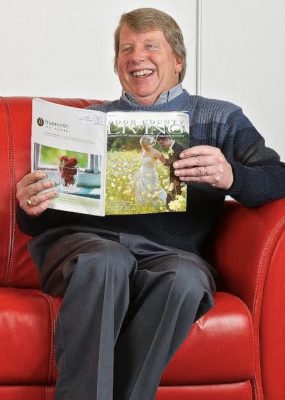 Grutzmacher has been involved in newspapers, advertising, publishing, and print production for over 40 years. His first published stories appeared in the Beloit Daily News while he was still in high school. He worked for and eventually served as co-editor of his college newspaper and, in Door County, he wrote feature stories for Chan Harris’ Door County Advocate.

While living in Chicago, Steve worked for a marketing communications company: starting out as a copywriter and eventually rising to Vice President in Charge of Operations. In these years he executed advertising concept development, wrote copy, performed media buying, and worked closely with the company’s major clients.

He returned to Door County in 1989 to work in his parent’s bookstore, which he eventually managed and ultimately owned until he closed the store in 2013. Through this experience he gained first hand knowledge of the challenges facing Door County businesses.

In addition to the bookstore, Steve worked for the Door Reminder, coordinating editorial content for their seasonal “Vacation Guide” section, and started writing a column entitled “An Outlook” in 1993. Since 2003, his column has appeared in the Peninsula Pulse. His articles and features have been widely published throughout northeast Wisconsin.

He has served on the Board of Directors of the Sister Bay Advancement Association, the Door County Visitor Bureau, and the Newport Wilderness Society and he is particularly proud of his work with Northern Door Children’s Center where he served as chairman of both the long range planning committee and the building committee, raised the money for the construction of the new center, and helped supervise the construction of the building.

As Sales Manager and as a writer, Steve brings a wealth of experience in all aspects of advertising, newspaper and magazine production, and advertising budget management to his Peninsula Publishing & Distribution clients. He takes a personal interest is seeing them realize their goals.